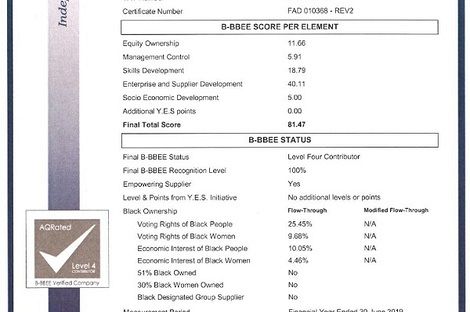 “B-BBEE has always been a strategic focus in KAP Automotive, with a strong top-down focus. CEO and executive management support and understanding regarding the importance of B-BBEE has been a key factor of our success,” explained Chanel Smailes Head of Human Capital for KAP Automotive.

Having a clear strategic intent to increase one level per year, with the goal of reaching a Level 4 status by mid-2020, gave the company direction of the areas that needed to be addressed.

“The initial focus was to understand where we were not optimising points earned and to address any shortfall on priority elements to avoid discounting. A review of our processes revealed that we were not banking points that we had earned simply because our administration processes were not effectively recording the information and initiatives in an accurate and timeous manner.”

“By simply improving this single area, KAP Automotive discovered there were many areas where we were doing amazing work, in particular in Skills Development, Preferential Procurement and Socio-Economic Development elements that were already contributing to improving our status,” Mrs Smailes said.

A strong team led by senior management drove the identification of areas within the scorecard where KAP Automotive was not scoring well, and initiatives were identified to address these shortcomings. The project was anticipated to reach full potential by mid-2020. However, some of these initiatives bore fruit earlier than expected and assisted KAP Automotive in achieving a Level 4 B-BBEE score a year ahead of target.

“As a company we recognize the critical role transformation plays in creating a future that supports the success of the SA Automotive Masterplan, and challenge NAACAM members to undertake similar initiatives,” Mr Ugo Frigerio CEO of KAP Automotive added.

“These initiatives have been bedded down and expanded, and will continue into the new verification period to ensure the future sustainability of this rating,” he concluded.