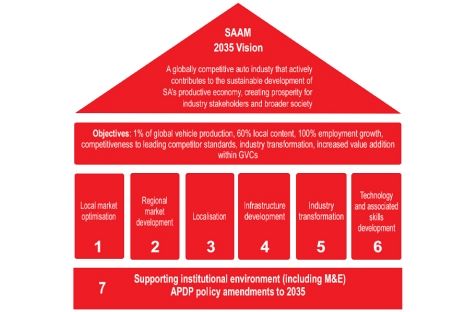 NAACAM (National Association of Automotive Component and Allied Manufacturers) welcomes the finalisation of the SA Automotive  Masterplan process and the announcement of the policy that will be used to achieve the objectives of the sector by 2035.

“It is our view that this process has been adequately robust. The end outcome is balanced and in the long-term interests of South Africa as a manufacturer of automotive products. We are satisfied that NAACAM’s inputs were fully considered. The dti under Minister Rob Davies, should be congratulated for the high levels of engagement, and evidence-based decision making that led to this announcement,” said Ugo Frigerio, newly elected NAACAM president, and also CEO of KAP Automotive.

The dti has been clear about its long-term commitment to support the sector, as well as the benefits of having a deep and diverse supply chain in SA. There is sufficient focus within the amended policy levers to move the domestic supplier base on an upward trajectory in terms of localisation, new venture and employment creation.

Renai Moothilal, NAACAM executive director stated that “the conversion of what was previously purely an incentive for vehicle assembly, to one that factors in localisation is a step change in how assemblers will view domestic sourcing. Similarly, the increased reward levels linked to duty credits for value addition will benefit component manufacturers. This will kick start economic activity in the value chain, and help unlock some of the opportunities around transformation and employment”.

The SA Automotive Masterplan has set out several objectives, including having a localisation rate of 60% and doubling employment in the whole sector by 2035.

With the high-level policy announcement now complete, NAACAM commits itself to assisting the implementing authorities and key industry partners including the vehicle assemblers and labour to getting the systems and relationships in place that give effect to the planned policy outcomes. The future for South Africa’s automotive manufacturing industry in the post 2020 period is promising.